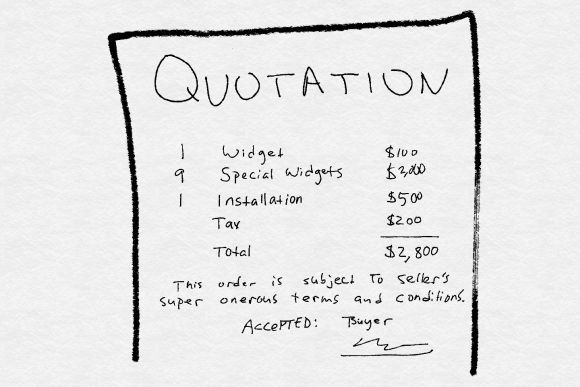 I’ve advised people for years not to sign the other side’s purchase orders, acceptances, quotations, and other ordering documents unless the documents have been fully negotiated. That’s because it puts you at a huge disadvantage in the battle of the forms.

I’ve also advised people to negotiate terms that are essential–even if they don’t sign a fully-negotiated contract–and have both parties sign a document setting out those terms, because you can’t win the battle of the forms. So if–as a seller–a 12-month limited warranty and liability cap in the amount of your product’s purchase price are important to you, you should make sure that you and your buyers sign contracts agreeing to those terms. Otherwise, you’ll probably end up with a broad, four-year warranty and unlimited liability (the defaults under Article 2 of the Uniform Commercial Code, which governs contracts for the sale of goods).

These thoughts came to mind when I read a case recently where a buyer signed the seller’s quotation, thus ostensibly negating a term in a contract the parties had signed previously. In that case the parties had negotiated and signed a “non-disclosure agreement, financing and supply agreement.” It’s unclear from the court’s opinion whether the document dealt only with confidential information or whether it also contained a framework for the later transaction. What is clear is that the parties anticipated a later document to control the terms and conditions of the transaction.

That document came in the form of two quotations that the sellers presented to the buyers for signature. The quotations detailed the scope of work, schedule of payments, and terms and conditions of sale. From the opinion, these terms and conditions appear to have been standard, non-negotiated terms. The buyers signed the quotations. When the business relationship went south, the sellers sued the buyers’ principals in the Circuit Court of St. Louis County, relying on the quotations’ forum selection clause. A week later, the buyers instituted arbitration proceedings, which were provided for under the non-disclosure agreement. The sellers moved to stay the arbitration on the grounds that no valid and enforceable arbitration agreement existed between the parties, and the buyers moved to compel arbitration.

Would the case have come out differently if the buyers had not signed the quotations and had put their own terms and conditions into play? It’s certainly possible. Then there would have been a signed arbitration agreement (which was broad enough to cover the issues in dispute) with a later-delivered document from the sellers that purported to impose a forum selection clause. The terms would have been put through the battle of the forms grinder of Article 2 of the UCC, and the sellers’ forum selection clause quite possibly would not have been left standing.

Tips for Drafters and Businesses

What can contract drafters and businesses do to ensure that they don’t end up with unwanted contract terms? Here are a few tips.