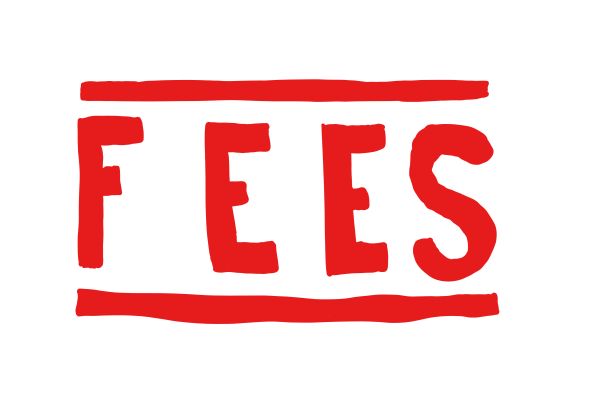 Even before reading Midland Property, I’d had attorneys’ fees provisions on my mind. Under the “American Rule,” which is followed by courts in Missouri and most of the rest of the U.S., the parties to breach of contract suits have to pay their own attorneys’ fees — even when they win the case. As a practical matter, this means that it’s often uneconomical for a party to enforce its contract because it’ll still have to foot the bill for its lawyers. I’ve advised a number of clients who’ve had to make the decision to sue or not to sue, and the inability to recover enforcement costs really affects the calculus. END_OF_DOCUMENT_TOKEN_TO_BE_REPLACED 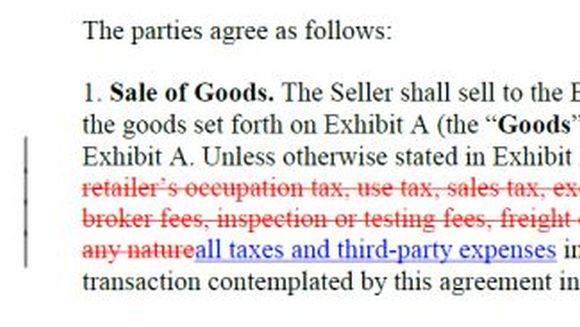 It’s important not to lose control when you’re negotiating a contract. I’m not talking about losing your cool, but staying on top of contract versions. Here’s an example from my professional youth:

I was negotiating a contract for a large company during my first or second year of practice. There was a lot of back and forth between the lawyer on the other side and me with contract drafts being sent both ways over a period of weeks. Suddenly, I realized that I’d completely lost track of which draft was current and that I’d made revisions to the wrong draft some point along the way, creating a confusing mash-up of old, intermediate, and new contract language. I had to call opposing counsel for help — a bit embarrassing, to be sure.

END_OF_DOCUMENT_TOKEN_TO_BE_REPLACED

I uploaded a simple asset purchase agreement to Docracy and thought I’d share it here. I drafted it with very small businesses in mind.

It’s structured as a bill of sale and assumption agreement to make it easy for do-it-yourselfers to use (in many cases there’ll be no need for a separate bill of sale, it doesn’t require closing certificates, and it’s otherwise largely a fill-in-the-blank document). Although it’s always best to have a professional help with important legal issues, most people do these deals without a safety net, so it makes sense to provide documents that’ll increase their chances of documenting their deals adequately.

END_OF_DOCUMENT_TOKEN_TO_BE_REPLACED 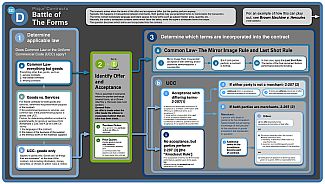 A company’s key contracts represent a valuable business asset. Thus, it’s crucial that the contracts remain in force as a business changes hands from the seller to the buyer when the business is sold.

Although deal lawyers generally describe their practice as involving “mergers and acquisitions,” the sale of a small or medium-sized business is usually structured as either an equity sale or an asset sale. In an equity sale, the buyer buys the equity from the owner(s) of the target company — stock in the case of a corporation and membership interests in the case of a limited liability company. The business is transferred to the new owners, corporate or limited liability company entity and all, and the target becomes a wholly-owned subsidiary of the buyer. There is no change in the status of the target entity itself, and its contracts, assets, and liabilities remain with the entity.

END_OF_DOCUMENT_TOKEN_TO_BE_REPLACED

Imagine a world where continuous improvement is the norm. Where ideas are tested and only the best ones adopted. Where inferior practices are discarded in favor of better methods.

This is Ken Adams’s vision of the world of contract drafting.

Ken is the author of The Structure of M&A Contracts as well as numerous contract-drafting articles that have been published in prominent legal journals and magazines. He also publishes the popular blog Adams on Contract Drafting (previously published as The Koncise Drafter, which I reviewed in The Reading List). Plus, he lectures at Penn Law School, conducts seminars around the world, testifies as an expert witness, and is the founder and president of Koncision Contract Automation, which I reviewed in Koncision: One Giant Leap. Readers of this blog know that I’m a big fan.

END_OF_DOCUMENT_TOKEN_TO_BE_REPLACED

The Missouri Court of Appeals recently upheld the denial of the Kansas City Chief’s motion to compel its former employee to arbitrate an age discrimination claim. The purported arbitration agreement at issue was not binding because it was not supported by consideration.

The appellate court rejected the Chiefs’ argument that the Chiefs’ mutual agreement to arbitrate constituted consideration because the agreement bound only the former employee, not the Chiefs. Here’s a link to the case, if you’d like to know more.

I just downloaded Edraw Mind Map freeware and was surprised to see that the end user license agreement was so short. Without commenting on the quality of the document (other than to applaud the use of the Oxford comma), I’ll say that I’m grateful that my morning wasn’t wasted slogging through a EULA of Apple-like proportions. Plus, I know that I’m not selling my soul because I actually read the thing.

Here’s the EULA for your reading pleasure: END_OF_DOCUMENT_TOKEN_TO_BE_REPLACED

Last week I posted a sample contract and asked for feedback. I’ve made a few changes, most of which are in response to reader comments. here’s a quick summary of the changes:

I’ve downloaded a couple of precedent contracts over the past few months from the crowd-sourced contract application Docracy for use in my legal practice. When I needed a simple contract for the sale of goods today, I checked in to see what was available. Finding no such agreement, I decided to finally make a contribution. You can see my handiwork here.

Several weeks ago I explored the idea of minimum effective legal protection in my post Considering a Contract’s Legal-Battle Rating. The gist is that in any given situation there’s a minimum level of legal protection that a contract — or a clause — should provide. Falling below that level leaves a party overly exposed to business and legal risks. When I drafted the sample I contributed to Docracy, I sought to achieve a seller-friendly MELP version of a simple business-to-business contract for the sale of goods to be used when there’s no special reason to think that the agreement will be litigated.

I’ve inserted the sample agreement below. What do you think? Would the document provide effective protection for a low-stakes run-of-the-mill B2B sale of goods, or have I omitted a clause that would leave my sale-side client unduly exposed? Is there any dead weight I could throw overboard?